“We interrupt this phone call,” a woman’s voice said over the phone. “The President of the United States is on the line. Mr. Obama…”

After the phone call Tahsanchat Ferris ran through the halls of her half-trailer office screaming in excitement. Minutes earlier she was on a conference call with a handful of AmeriCorps directors, one of whom was recently appointed as the CEO of AmeriCorps, Wendy Spencer

Indian mascots — you're out

Removing Native American names and mascots from college and professional teams is the right thing to do. 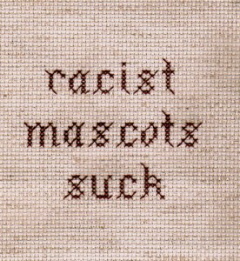 Should sports teams have Native American mascots? The debate surrounding this question has lasted for decades. Supporters argue that these mascots honor American Indian tribes, while opponents argue that these mascots stereotype and dehumanize Native peoples. I’m staunchly in the latter camp, which is why I was thrilled to hear that the state of Wisconsin has passed a law meant to “eliminate race-based nicknames, logos and mascots,” USA Today reported.

The law, the first of its kind in the country, allows the public to file complaints against race-based mascots and the like with school districts. Afterwards, the state determines whether or not the mascot in question is discriminatory. If a school district has permission from a tribe to use its name as a mascot, for example, it can argue that such a mascot isn’t racially offensive.

On Oct. 8, the Kewaunee School District in the Green Bay area dropped the name “Indians” after a retired teacher named Marsha Beggs Brown complained about the moniker used by the district since 1936. The new district nickname is “Storm.” To date, approximately 30 Wisconsin school districts use Indian names and about 30 have already dropped them. In a year, the Kewaunee School District must remove all signs bearing the “Indians” name from its campuses.

Of course, not everyone in Kewaunee is thrilled about the move, with some residents declaring that “Once an Indian, always an Indian.”

Taylor Holly, a Kewaunee student, told Fox 11 WLUK-TV of the name change, “I thought we honored them. I never thought anything was being disrespectful.”

Many feel the same way, arguing that Indian nicknames are a part of a school’s longstanding tradition and should be upheld. While they assert that they’re honoring Native tribes, members of the American Indian community beg to differ, such as activist Suzan Harjo, who went to court in 1992 to dispute whether NFL team the Washington Redskins had a right to trademark that name. Harjo and a half-dozen other plaintiffs argued that the “Redskins” name violated the Lanham Act of 1946, which bans organizations from using disparaging trademark names. In the end, however, the courts ruled that too much time had passed to file suit, as the NFL team had trademarked the “Redskins” name back in 1967.

So, what’s the harm of such mascots? For one, many are just racist caricatures of Native Americans illustrated with exaggerated facial features and bright red skin. Psychologists such as Jesse Steinfeldt of Indiana University say that these names create a racially hostile environment for students. Think about the young Native Americans in the stands watching as a mascot that’s supposed to represent them engages in buffoonery. All the while, fellow students in the stands do Tomahawk chops and fan their hands over the mouths to imitate the chants they’re told indigenous peoples make. To call such an environment “hostile” is an understatement. At these sporting events, throngs of rowdy sports fans are given free license to act out racial stereotypes en masse. If you’re Native American and in that crowd, you’re powerless to stop having blatant bigotry thrown in your face.

The good news is that over the past 40 years, the number of sports teams using “Indian” nicknames has reportedly dropped from 3,000 to fewer than 1,000. This is thanks in part to the National Collegiate Athletic Association banning Native American nicknames, mascots and imagery in postseason games five years ago. Now Wisconsin is leading the country in purging these names from public school districts. Good riddance, and may other states follow in Wisconsin’s footsteps. A group of undergraduate students in an Ethnic Studies class produced a video about the use of Indian mascots for sports teams called "I Am Not a Mascot".  Some of the video focuses specifically on Colorado schools which currently use Indian mascots (or which have switched mascots), but much of the video is of more general interest.
You can view it at
Action follows N.D. Supreme Court ruling that OKed board's right to drop nickname, logo; SBHE's original May 2009 decision stands
By: ChuckHaga <http://www.grandforksherald.com/event/author/name/Chuck-Haga/> , Grand Forks Herald
MAYVILLE, N.D. -- The State Board of Higher Education decided today to retire the UND Fighting Sioux logo and nickname and directed Chancellor Bill Goetz to so advise UND President Robert Kelley and urge him to begin the transition.
The board's president, Richie Smith, brought up the logo issue at the end of an all-day meeting, noting that as the board convened this morning the N.D. Supreme Court affirmed a district court ruling that struck down an injunction that had been sought by several members of the Spirit Lake Sioux tribe.
Smith noted that the board had voted in May 2009 to retire the name. Lifting the injunction put that action back into effect, he said, and unless he heard a motion to reconsider "the name is dropped."
Board member Claus Lembke of Bismarck offered a motion to reconsider, but it died for a lack of a second.
At that point, Smith turned to Goetz and directed him to send a letter to Kelley recommending the transition begin.
"We didn't have the votes on the motion to reconsider," board member Grant Shaft of Grand Forks said.
He and board member Duaine Espegard, also of Grand Forks, said they had calculated such a vote would fail on a 4-4 tie.
"I am a longtime Grand Forks kid so I find it kind of sad," Shaft said of today's decision.
Espegard agreed. "I think it is a sad day," he said. "I don't look at it as a win for anybody. I see it as reality."
'A new set of challenges'
Kelley said the board's action today was not a surprise.
"It is a matter now of managing a transition," he said.
"I am happy to have a new set of problems to solve," he said.
"This is going to be a new set of challenges, and it is going to be hard work for everybody."
Kelley said that people "all over the country are watching to see how we handle this," including thousands of UND alumni.
Noting that many alumni are passionate about the logo and nickname, he said they also have proven to be "very resilient."
Kelley said he will call the commissioner of the Summit League Friday morning "and say the board finally acted."
He said he hopes that "puts us into the game (Summit League membership) no later than 2013."
Suzan Harjo v. Pro-Football Inc., a case that began in 1992, centered on whether a dispute over a potentially offensive trademark can be dismissed if the challenge was not filed promptly. Though the Trademark Trial and Appeal Board ruled in 1999 that the name was disparaging and should be changed, the U.S. District Court for the District of Columbia and U.S. Circuit Court of Appeals in Washington, D.C. later decided that the challengers had waited too long to file their petition. The Redskins first registered the mascot with the Patent and Trademark Office in 1967.  Full story at: http://tinyurl.com/yzo6oeu

Schools in Wisconsin could be fined for $100 to $1,000 for using Indian nicknames, mascots, and images in a bill being introduced Wednesday (1/13) in the legislature.  For full story please see:  http://tinyurl.com/yk9968h

As the "unofficial" mascot for the Washington Redskins during the past 31 years, he has suffered more than enough. His leg was broken. An eye was nearly punched out by a Philadelphia Eagles fan. He lost to the Baltimore Ravens' "Poe" bird in last year's Most Fierce Mascot competition and, before that, was rejected for the Mascot Hall of Fame.  Story at: http://tinyurl.com/yhoew9n