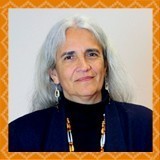 In 1974, Yurok tribal member Abby Abinanti became the first Native American woman to be admitted to the State Bar of California. Over the next 40 years, she served as a San Francisco Superior Court commissioner, acted as judge or magistrate for several Western tribes, and established the Yurok Tribe’s fishing court. Today, she is the tribal court’s chief justice.

It’s been an auspicious career for a woman who, as a youngster, never dreamed of donning a judge’s robe. Born in San Francisco in 1947 and raised on the Yurok Indian Reservation, which lies 45 miles from the Pacific Coast along California’s Klamath River, Abinanti originally wanted to be a journalist.

“I developed that interest in high school,” reflected Abinanti, 66. “The journalism teacher befriended me and worked with me during a difficult time in my life, and he gave me a scholarship.” With a laugh, she added, “I think he sort of made it up so he could give it to me.”

While Abinanti was studying journalism at Humboldt State University in Arcata, California, she came across a flyer for the University of New Mexico School of Law. The flier addressed programming specifically for Native American students.

To subscribe to a blog that provides information pertinent to the Native American community go to: http://www.nativenewsnetwork.posthaven.com 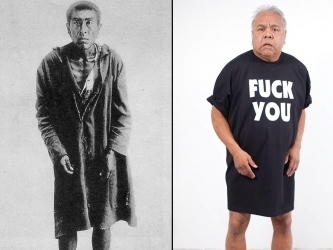 Much of James Luna's work is distinctly Native American, but the contemporary artist isn't churning out traditional pottery or Kachina dolls. The edgy, half-Mexican, half-Luiseño artist is known for his politically charged, often humorous installations and performance art. His best-known work includes the controversial "Artifact Piece" that he originally staged in the late '80s for the Museum of Man in Balboa Park. Dressed in a loin cloth, he lay in a glass case for hours as museum visitors ogled him, reading informational cards describing the source of scars on his body, mostly results of alcohol-fueled incidents.

"Physically, spiritually and mentally, that piece was devastating, because you're so vulnerable being looked at like that," Luna recalls, giving CityBeat a quick preview of I Con, his new photography exhibition opening with a reception from 5 to 7 p.m. Thursday, March 20, at Mesa College Art Gallery, alongside an exhibition by former collaborator Richard A. Lou. Lou will discuss his work, and Luna will present a 20-minute performance piece immediately after the reception in Room G101.

Like much of Luna's work, "Artifact Piece" carried a message about how mainstream culture chooses to include or ignore Native American culture. He wanted to draw attention to the way museums tend to treat native cultures as if they're a collection of artifacts from dead people, focusing on their history without acknowledging their place in contemporary culture.

The photographs in Luna's new show continue to prod at the notion of mainstream culture's inclusion and exclusion of American Indians, asking viewers to dig deeper into the meaning behind his whimsical work. He calls the photos in the show "Performographs"—performance art captured with a camera. Many of the pieces start with a written script or concept. He boils it down to a solitary moment and then freezes it in a stylized, narrative photo.

In one series, for example, Luna, who lives on the La Jolla Indian Reservation in North County but rarely shows locally, juxtaposes images of himself next to historical photos of Ishi, the last member of the Yana tribe of Northern California.

"The point of the work is, if you don't know about this man, you should," Luna explains. "If you want to know more, go look it up. I'm not going to spoon-feed people." 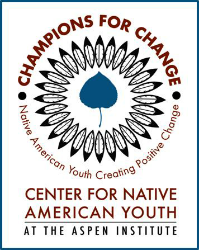 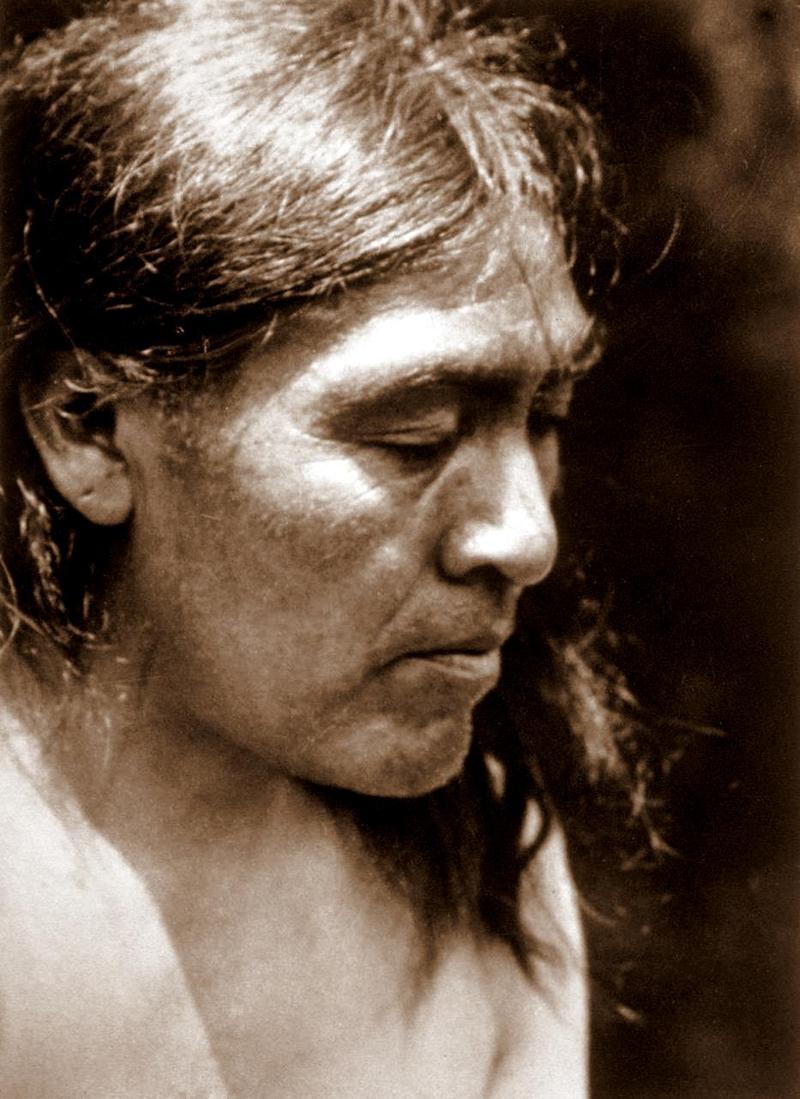 In August of 1911 a starving native-American man walked out of the Butte County wilderness into Oroville and became an instant journalistic sensation. He was identified by UC anthropologists Alfred Kroeber and T. T. Waterman as the last of a remnant band of Yahi people native to the Deer Creek region. The UC anthropologists immediately went north to Oroville and brought him back to live on the Parnassus campus, giving him the name "Ishi" which meant "man" in the Yahi language. During the next four years, the anthropologists and physicians at UC would learn much from Ishi, as he demonstrated his toolmaking and hunting skills, and spoke his tribal stories and songs. Newspapers frequently referred to Ishi as the "last wild Indian," and the press was full of anecdotes referring to Ishi's reaction to twentieth-century technological wonders like streetcars, theaters, and airplanes. In his writings, Waterman respectfully noted Ishi's "gentlemanliness, which lies outside of all training and is an expression of inward spirit," and the records of the time reveal much mutual respect on the part of Ishi and his scientist-observers. Each weekend, hundreds of visitors flocked to Parnassus to watch Ishi demonstrate arrow-making and other aspects of his tribal culture. 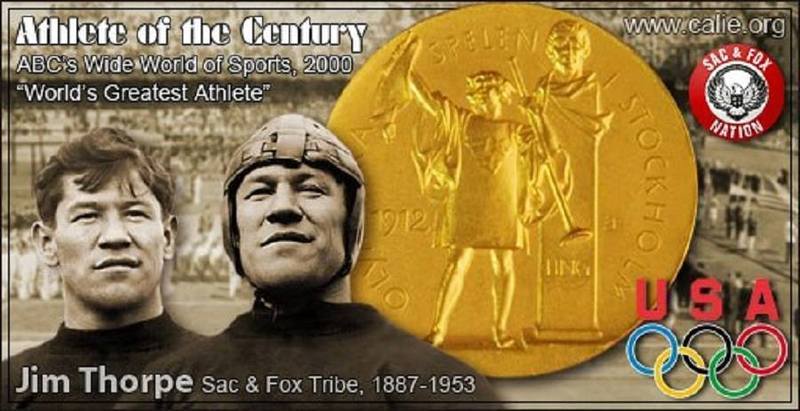 James Francis "Jim" Thorpe (Sac and Fox) Wa-Tho-Huk, translated as "Bright Path";[ May 28, 1888 – March 28, 1953)[2 was an American athlete of both Native American and European ancestry. Considered one of the most versatile athletes of modern sports, he won Olympic gold medals for the 1912 pentathlon and decathlon, played football (collegiate and professional), and also played professional baseball and basketball. He lost his Olympic titles after it was found he was paid for playing two seasons of semi-professional baseball before competing in the Olympics, thus violating the amateurism rules that were then in place. In 1983, 30 years after his death, the International Olympic Committee (IOC) restored his Olympic medals.

In a poll of sports fans conducted by ABC Sports, Thorpe was voted the Greatest Athlete of the Twentieth Century out of 15 other athletes including Muhammad Ali, Babe Ruth, Jesse Owens, Wayne Gretzky, Jack Nicklaus and Michael Jordan 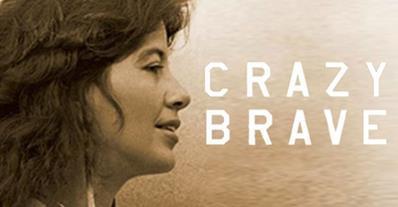 of poetry, which includes such well-known titles as How We Became Human- New and Selected Poems, The Woman Who Fell From the Sky, and She Had Some Horses have garnered many awards.  These include the New Mexico Governor’s Award for Excellence in the Arts, the Lifetime Achievement Award from the Native Writers Circle of the Americas; and the William Carlos Williams Award from the Poetry Society of America. For A Girl Becoming, a young adult/coming of age book, was released in 2009 and is Harjo’s most recent publication.Her seven books of poetry and five award-winning CD's.

Dr. Charles Eastman, a Dakota, hears reports of a battle. Despite a blizzard and Army efforts to delay him, three days later he arrives with 85 Lakotas and 10 to 15 white civilians who plan to bury the dead at Wounded Knee. Although he had been told that the incident was a battle, Eastman writes that it was massacre, in which those who fled were “relentlessly hunted down”. Amid the destruction he finds a baby girl, named Zinkala Nuni by Lakota survivors, who is adopted by an Army officer. 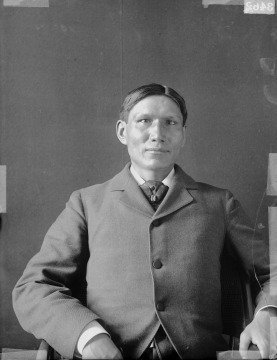 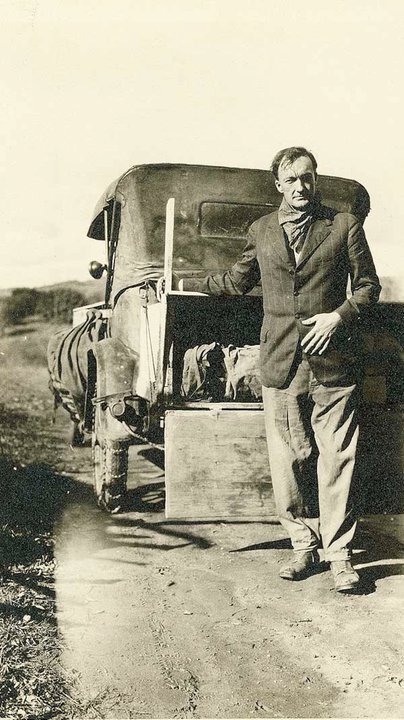 Please introduce yourself with your name and title.

Iswkwistsay’ ay’. My name is John Sirois. My title is chairman of the Colville Business Council, informally called the tribal council.

Your Native name, its English translation, and/or nickname?

My Indian name is say’ ay’, given to me by my maternal grandmother. say’ ay’ is one of those names that do not translate well into English. However, it describes my eyes and the vision that comes with my eyes.

Patricia A. Locke, who worked for decades to preserve American Indian languages and became a pioneer in an effort to grant the tribes greater authority in the education of their children, died on Oct. 20 at a hospital in Phoenix. She was 73 and lived in Wakpala, S.D., on the Standing Rock Indian Reservation.

The cause was heart failure, said her daughter, Winona Flying Earth.

Ms. Locke, of Lakota and Chippewa heritage, won a MacArthur Foundation fellowship in 1991 for her work to save tribal languages that were growing extinct throughout the United States.

The award followed more than two decades of her advocacy for better education of Indians. In the 1970's, she was appointed to the Interior Department Task Force on Indian Education Policy, and eventually helped write legislation granting tribes the authority to set up their own education departments instead of following state requirements.

Education departments and tribal education codes were ultimately created among more than 30 tribes around the country, and Ms. Locke also helped 17 tribes establish colleges they controlled.

Patricia Ann McGillis was born on Jan. 21, 1928, on the Fort Hall Indian Reservation in Idaho. She earned a bachelor's degree from the University of California at Los Angeles in 1951. She married Charles E. Locke in 1952; they divorced in 1975.

Ms. Locke taught for more than 40 years, from elementary to university level, and lectured on Indian issues throughout the United States. She worked to protect sacred Indian sites and, starting in 1993, was national coordinator of a coalition that pushed for passage of the American Indian Religious Freedom Act Amendments, federal legislation adopted in 1994 that allowed use of peyote for religious purposes.

Besides her daughter, who lives in Wakpala, she is survived by a son, Kevin Locke, also of Wakpala, a performing artist who works to preserve Lakota music; five grandchildren; and six great-grandchildren.