Elaina Albers Is My Niece

Bringing Our Languages Home: Language Revitalization for Families is a book Edited and with a How-to Guide for Parents by Leanne Hinton (ILI/CILO partner).

Throughout the world individuals in the intimacy of their homes innovate,improvise, and struggle daily to pass on endangered languages to their children. Elaina Albers of Northern California holds a tape recorder up to her womb so her baby can hear old songs in Karuk. The Baldwin family of Montana put labels all over their house marked with the Miami words for common objects and activities, to keep the vocabulary present and fresh. In Massachusetts, at the birth of their first daughter, Jesse Little Doe Baird and her husband convince the obstetrician and nurses to remain silent so that the first words their baby hears in this world are Wampanoag. Thirteen autobiographical accounts of language revitalization, ranging from Irish Gaelic to Mohawk, Kawaiisu to Maori, are brought together by Leanne Hinton, professor emerita of linguistics at UC Berkeley, who for decades has been leading efforts to preserve the rich linguistic heritage of the world. Those seeking to save their language will find unique instruction in these pages; everyone who admires the human spirit will find abundant inspiration.Languages featured: Anishinaabemowin, Hawaiian, Irish, Karuk, Kawaiisu, Kypriaka., Maori, Miami, Mohawk, Scottish Gaelic, Wampanoag, Warlpiri and Yuchi.  About the Editor
Leanne Hinton is professor emerita at the University of California, Berkeley, and a founding
member of the board of the Advocates for Indigenous California Language Survival. She has
authored many articles and several books on language revitalization, including Flutes of Fire: Essays on California Indian Languages; The Green Book of Language Revitalization in Practice (edited with Ken Hale); and How to Keep Your Language Alive: A Guide to One-on-One Language (with Matt Vera and Nancy Steele). She has worked with AICLS to develop and implement the Master-Apprentice Language Learning Program and the Breath of Life Language Workshops, both of which have expanded throughout the US and internationally. In 2005 she received the Cultural Freedom Award from the Lannan Foundation for her work on the revitalization of endangered languages. Leanne lives in Berkeley, California, with her husband, Gary Scott, and delights in family time with their four children and eight grandchildren. Order information
Bringing Our Languages Home is available through bookstores, major book distributors including Ingram, Baker and Taylor, and other distribution centers, or by contacting Heyday directly at (510) 549-3564, ext. 304, via fax at (510) 549-1889, by email at orders@heydaybooks.com,
or by visiting our website at www.heydaybooks.com.
To sponsor a reading or event
Please email your request with detailed information about your bookstore or organization to
events@heydaybooks.com, or call (510) 549-3564, ext. 316. Trade paper • 6 x 9 • 256 pages
$20.00
ISBN: 978-1-59714-200-7
Community Language Archiving
Introductory Course
June 3-28, 2013
Tucson, ArizonaTribal archives are often the repository for historical documents and records of all kinds.  While language archives have been used primarily by linguists, more tribes are now seeking ways to either establish language archives or to add them to their existing archive program. The American Indian Language Development Institute (AILDI) is offering a course, Community Language Archiving designed to aid in the understanding, creation and maintenance of a language archive.In this introductory course students will develop an understanding of best practices as they apply to creating and maintaining language archives with an emphasis on digital archiving and accessibility. The course includes an introduction to best practices, how to decide what to archive, how to create digital resources, and basic web design to facilitate access to resources in a digital archive.  At the end of the course students will have a basic understanding of archival development and an understanding of the resources available to develop a language archive. Students enrolled in this course will be required to bring their own laptop.Upon completion of the course, participants will earn 3 credits that can be transferred to a college or university program. The course is one of seven that will be offered as part of AILDI’s annual summer training program.  For more information about courses and the training program go to http://aildi.arizona.edu/2013-courses or contact COE-AILDI@email.arizona.edu , 520-521-1068.
Alyce Sadongei
American Indian Language Development Institute (AILDI)
University of Arizona
www.aildi.arizona.edu
sadongei@email.arizona.edu
www.facebook.com/COE.AILDI
(520) 621-1068; 626-4145 P
(520) 621-8174 F

Learning More Than a Language

Akwiratékha Martin’s grandmother, like so many of her generation in Kahnawake, didn’t see learning Kanien’kéha—the Mohawk language—as a priority for her children, or her grandchildren.

Martin’s grandmother, who went by her English name, Marina, belonged to a generation who were beaten if they spoke Kanien’kéha, and were told their language was inferior to European tongues.

But after having a stroke in the late stages of her life, Marina asked a then-17-year-old Martin to do something for her.

“Akwiratékha, promise me that you’ll speak the language,” she said. Martin responded like any teenager might: “Yeah, Ma.” Marina passed away shortly thereafter.

Martin not only kept his promise, for the past 8 years he has been helping others in Kahnawake fulfill promises they made to themselves, their relatives, their children or their community.

Racing To Save A Language 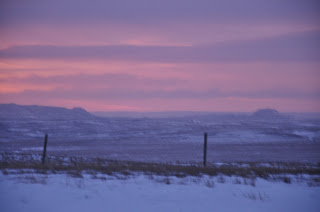 The vesper landscape on the Standing Rock Sioux Indian Reservation. Barren Butte stands alone from the Barren Hill range. Photo by Dakota for The First Scout.
Lakota Language Nest, An Immersion School
Reviving A Language On The Knife’s Edge Of Extinction
By Dakota for the North Dakota Humanities Council
It is the heart of winter on the Standing Rock Sioux Indian Reservation. Gleaming white snow blankets the landscape, the Missouri River has turned to ice and the crisp cold air somehow makes every sound sharper–the peal of a bell seems to carry an impossible distance from town–but the sounds of children playing, laughing and singing warms everything.
The children are in pre-school, ages three to four. Their high-pitched play echoes down the hall when their door opens. The pitch of little voices sounds like what one would hear in any other early child care service across the state, but listen closer and it becomes obvious that this isn’t like any other day care service. The children speak a mix of English and Lakota amongst themselves, but the teachers strictly speak only Lakota in the classroom. This preschool is called Lakȟól’iyapi Wahóȟpi, the Lakota Language Nest. It is an immersion school still in its first year of practice and based on the language nest model which was designed by the Maori people in New Zeeland. The language nest was established to raise language loss awareness on the reservation and to raise up a new generation of first-language Lakota speakers.
Access full blog article below:
http://ndhumanities.blogspot.com/2013/01/racing-to-save-language.html?spref=tw

Can the digital age save the Cherokee language? The halls of Facebook, Google and texting

Written by Becky JohnsonSusan Gathers was kicked back in the student union one afternoon, her thumbs poised over her smart phone, simultaneously bantering with friends while texting — sometimes even texting the same person she was talking to.This impressive skill to seamlessly dialogue in multiple mediums at once is nothing new for “Generation Next-ers” like Gathers. But unlike the typical truncated words and vowel-less abbreviations that permeate normal text-speak, her screen was filled with Cherokee syllables as she pushed send. “What is … wait … oh, I get it. Ha-ha-ha-ha,” Venice Mason laughed from across the table after sorting out the Cherokee message Gathers sent her.A mobile app that makes texting in the Cherokee language possible has become indispensible for Western Carolina University students majoring in Cherokee studies.“I want to be fluent,” said Gather, a 23-year-old senior. “This is helping me reach that goal.”Access full article below:
http://www.smokymountainnews.com/news/item/9653-can-the-digital-age-save-the-cherokee-language?-the-halls-of-facebook-google-and-texting
FARMINGTON — "Ya'at eeh," George Werito says, greeting thousands of radio listeners across the Navajo reservation in their native language, Diné.

He has callers on the line, waiting. People want to tell him about road conditions, chapter meetings, and church functions.

If you tell him your bit of news, he will report it, but in a fun way. He throws in trivia, games and that sort of thing.

Werito, a radio personality at KNDN AM radio in Farmington, is considered the Jay Leno of the Navajo Nation, according to some of his listeners.

Language educators nationwide once again have the opportunity to attend the biennial Washington, D.C. based Breath of Life Archival Institute for Indigenous Languages sponsored by the American Folklife Center, Library of Congress, Endangered Language Fund, and National Science Foundation.

By some measures, California is one of the most linguistically diverse places on Earth—but unless certain steps are taken, that could change.

“Estimates as to how many indigenous languages were spoken here before contact range from 80 to 100,” says the Advocates for Indigenous California Language Survival (AICLS) website. “There are 50 indigenous languages that still have one or more native speakers, though these numbers are dwindling fast. There are also at least 30 languages with no native speakers left with descendants who desperately want to regain their languages.”

AICLS, a nonprofit founded in 1992, is one of a number of groups working to revitalize languages in the Golden State.

Google has launched a new website this week aimed at helping preserve the more than 3,000 languages of the world that are at risk of extinction.

The goal of the Endangered Languages Project is to compile the most up-to-date and comprehensive information about endangered languages and share the latest research about those languages and efforts to preserve them.

About half of the world's estimated 7,000 languages are at risk of disappearing in the next 100 years, Google said in a blog post earlier this week announcing the launch of the project.

"We have so many languages which are in danger of dying, and though there has been work done by linguists to document these languages, there are nowhere near enough linguists to do that," said Anthony Aristar, professor of linguistics and co-director of the Institute for Language Information and Technology at Eastern Michigan University, which helped create the site.

"It's not just a matter of documenting the languages, it's also a matter of revitalizing them if we possibly can."