The Northern California Indian Development Council is hosting a Community Health & Wellness Summit entitled Weaving Wellness In Native Communities March 31-April 2, 2011 at the Blue Lake Casino and Hotel. This gathering will provide communities with an opportunity to develop answers to the problems that confront them. The aim of the summit is to have participants work together to develop potential solutions and to provide the tools, training and support that will empower attendees to go back to their communities to create the change they envision based upon the culture and Native traditions of their Tribes.  For more information go to www.ncidc.org/NATIVEHEALTHSUMMIT.htm or call André Cramblit at 707.445.8451 or andrekar@ncidc.org 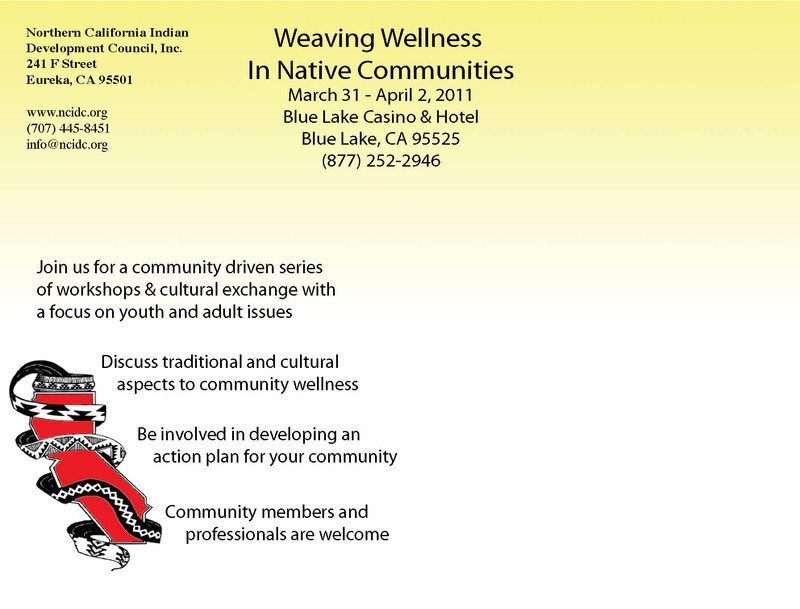 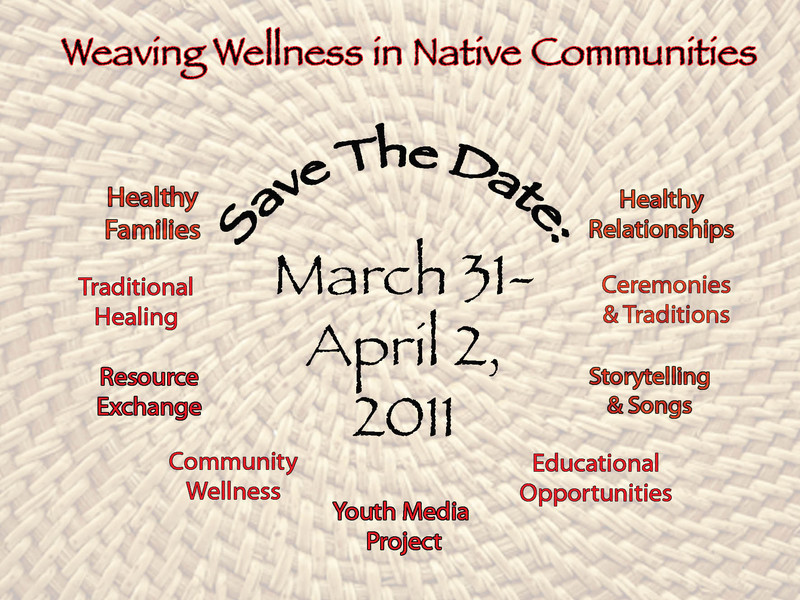 The National Congress of American Indians (NCAI) Policy Research Center developed a suicide prevention resource directory for AI/AN communities. That directory is attached here. Please feel free to share it with anyone who you think may be interested. NCAI also welcomes your thoughts about other resources they can add to the directory. Please contact Dr. Sahota with your recommendations. Thank you.

Download NCAIPRC_Suicide_Prevention_Res.pdf
Download Preventing_Youth_Suicide.doc
Download TFAH_2010Top10PrioritiesObesit.pdf
California NPR will be airing a show this Sunday night addressing health issues and tobacco use among California American Indians. It will air thisSunday night (10/24) on 89.3, 8pm. Myself and a UAII adult substance abuse client have a couple of minutes of interview time. It is available on-line now and you can listen to the 1-hour show on the following link as well:http://www.californiareport.org/archive/R201010212000

I went to this conference last year in Minneapolis and highly recommend it if you can attend:

The Department of Health and Human Services, Indian Health Service and the Department of the Interior, Bureau of Indian Affairs join together this year to present the first joint 2010 IHS/BIA National Behavioral Health Conference. This event demonstrates the commitment and renewed energy of both agencies to work in partnership to actively address behavioral health disparities in Indian Country. This year’s conference theme, A Shared Vision…Past, Present, and Future emphasizes the importance of leadership and collaboration toward improving the behavioral health status of American Indian and Alaska Native people. This focus on collaboration marks only the beginning of a much larger long-term vision, which will aim to bring the full weight of Tribal leadership, programs, and resources together for the advancement of American Indian and Alaska Native behavioral health.

“We are concerned to learn that so many high school students are taking prescription drugs that were not prescribed to them,” said Howell Wechsler, EdD, MPH, director of CDC’s Division of Adolescent and School Health.  “Some people may falsely believe that prescription drugs are safer than illegal drugs, yet their misuse can cause serious adverse health effects, including addiction and death.”

The 2009 National YRBS results also show that many high school students engage in other risk behaviors, which are harmful to their overall health and increase their risk of disease and injury. For example, during the seven days before the survey, 78 percent of high school students had not eaten fruits and vegetables five or more times per day, and 82 percent were not physically active for at least 60 minutes daily.  Also, during the 30 days before the survey, 19 percent of high school students smoked cigarettes, 28 percent rode in a car or other vehicle driven by someone who had been drinking alcohol, and 39 percent of currently sexually active students reported that they did not use a condom the last time they had sexual intercourse.  This information is similar to the 2007 YRBS findings.

About YRBS
National, state, and local YRBS studies are conducted every two years among high school students throughout the United States.  These surveys monitor health risk behaviors including unintentional injuries and violence; tobacco, alcohol, and other drug use; sexual behaviors that contribute to unintended pregnancy and sexually transmitted diseases, including HIV infection; unhealthy dietary behaviors; and physical inactivity. These surveys also monitor the prevalence of obesity and asthma.

More than 16,000 U.S. high school students participated in the 2009 National YRBS.  Data are presented only for black, Hispanic, and white students because the sample size of students from other racial/ethnic populations was too small for meaningful analysis. Parental permission was obtained for students to participate in the survey.  Student participation was voluntary, and responses were anonymous. States and cities could modify the questionnaire to meet their needs. The 2009 report includes national data and data from surveys conducted in 42 states and 20 large urban school districts.

The National YRBS is one of three HHS-sponsored surveys that provide data on substance abuse among youth.  The others are the National Survey on Drug Use and Health (NSDUH), sponsored by theSubstance Abuse and Mental Health Services Administration and a primary source of statistics on substance use among Americans age 12 and over (www.oas.samhsa.gov/nhsda.htm), and theMonitoring the Future (MTF) Study funded by the National Institute on Drug Abuse and conducted by the University of Michigan’s Institute for Social Research (http://monitoringthefuture.org). MTF tracks substance use and related attitudes among students in the 8th, 10th and 12th grades.

The 2009 Youth Risk Behavior Survey data are available at www.cdc.gov/yrbs.