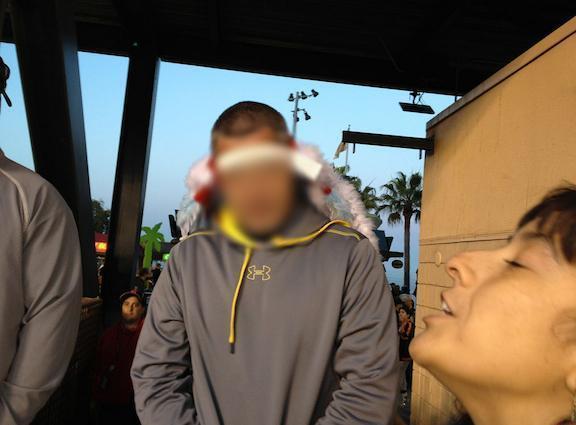 First of all, I don't wanna be on fb buuut....gotta spread the word somehow - so fb friends, help me out! Tonight was Native American Heritage Night at AT&T Park for the San Francisco Giants vs Padres game. There was a group of mostly white guys that were passing around a headdress. I went over to one guy and asked him to take it off, and after much convincing that is was disrespectful he agreed to take it off. Minutes later, another guy in the group has it on. Another native guy (Kimball Bighorse) sitting next to me went over with me and as we were attempting to explain to the group of drunk guys why it wasn’t ok - especially on Native Heritage Night - security gets calls. I started crying because I was so upset that people are idiots/the genocide of our people/cultures and the guy asks/yells at me because he’s getting embarrassed and flustered “what do you want from me?” so I said “give me the headdress” and he did. Security shows up and are some sad ignorant people of color that couldn’t comprehend what was happening and demanded I give them the headdress back because the “native” friend the group came with showed up and wanted it back and called police over. At that point I was like YOU CAN ARREST ME IF YOU THINK I’M GOING TO HAND THIS FAKE ASS CRAFT STORE DISRESPECTFUL HEADDRESS BACK TO SOME DRUNKEN WHITE GUY AND SAD TOKEN. So me and my friend get ushered back to the food stands and are getting kicked out. 2 cops ripped the headdress out of my hands and refuse to tell us if/why we are being arrested and why we are being asked to leave. then one tough guy cop goes “if you’re not going willingly we’ll make you” and 2 cops grab me by my arms and twist them and pull them up behind my back so far I think they are going to pop out of socket. we walk about 40 feet and I’m squirming and yelling the whole way that they’re hurting me and then one of them grabs me by my hair and throws me on the ground. as I’m getting cuffed i see my friend, Kimball Bighorse, (who was recording all this) laid out on the ground with 4 cops on him. they take us out of the game and let us go an hour later because they had ABSOLUTELY NO REASON TO ARREST US. I am beyond disgusted at the guys at the game, the people (including native around us who said nothing), the giants security for allowed that “headdress” inside to begin with, the police, and the San Francisco Giants organization as a whole for trying to host a heritage night without some type of cultural sensitive training. I would appreciate any help spreading the word about this and holding the team accountable and hopefully providing evidence for the native mascot issue that is under heavy media attention and fire right now. Thanks! April
——video——-> https://www.dropbox.com/s/grf7wotebxg3nxe/2014-06-23%2020.54.32.mov andhttps://www.dropbox.com/s/cdsipo1ni2ky4a3/IMG_2015.MOV
Getting in touch with the San Francisco Giants:  Call community relations at (415) 972-2000 ext.5 for other, and then ext.3 for community relations.  Also tweet: Text the word FAIR (for a comment / compliment) followed by your message to 69050. A discreet and effective response will be forthcoming.
Senior Vice President and General Manager Brian R. Sabean, Security Manager Charles Allen, Senior Director, Security Tinie Roberson.
San Francisco Giants
AT&T Park
24 Willie Mays Plaza
San Francisco, CA 94107
(415) 972-2000
Email Message to Giants:
https://secure.mlb.com/help/email.jsp?c_id=sf&primarySubject=&secondarySubject=Guest%20Services%20-%20Feedback&dest=guestservice@sfgiants.com