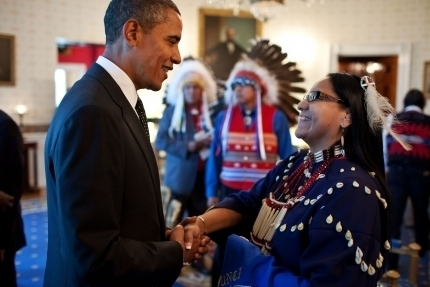 Continuing the Progress with Tribal Communities

Today, we are releasing the synopsis from the 2013 Tribal Nations Conference and the 2013 White House Tribal Nations Conference Progress Report. The 2013 Conference marked the fifth consecutive year that President Obama hosted a gathering of federally recognized tribal leaders and officials from across the Administration. At the Conference, tribal leaders directly engaged with the recently established White House Council on Native American Affairs and discussed key issues facing Indian Country. During his remarks to tribal leaders, President Obama emphasized the need to keep our bond of peace and friendship, our covenant chain with tribes strong not only for this generation but for future generations.

The Synopsis reflects the wide-array of issues and comments raised by tribal leaders during the break-out sessions; including economic and energy development, education, public safety, health care, and land and natural resources. The Tribal Nations Conference Progress Report provides a comprehensive overview of federal agencies’ progress in 2013 toward making improvements in Indian Country and highlights the following:

·         The President signed Executive Order 13647 establishing the White House Council on Native American Affairs consisting of Cabinet Secretaries and heads of other federal agencies and is responsible for coordinating policies across the federal government.

·         The President signed the Violence Against Women Reauthorization Act of 2013 (VAWA 2013) which contains provisions that significantly improve the safety of Native women and allow federal and tribal law enforcement agencies to hold perpetrators of domestic violence accountable for their crimes.

·         The President signed a significant amendment to the Stafford Act, which gives tribes the option of directly requesting Federal emergency or major disaster declarations, rather than receiving a declaration through the request of a Governor.

·         The Department of the Interior announced the first offers in the land buy-back program for Tribal Nations to initiate land consolidation efforts from the Cobell Settlement.

The President and his Administration remain committed to strengthening the nation-to-nation partnership with tribes to address the complex challenges facing Indian Country. The 2013 Conference also provided an important policy and engagement foundation for the White House Council on Native American Affairs as we work to address those challenges and meet our common goal of developing more prosperous and resilient tribal communities.