Iron Eyes Cody, who lived most of his life as an Indian, was very active in the Scouting program here in Glendale and often shared his knowledge of Indian lore with local groups. So, it was a surprise to many when a 1996 newspaper article said that Cody was not a Native American.

Cody presented himself as an Indian, both in his private and public life.

"Iron Eyes learned much of his Indian lore in the days when, as a youth, he toured the country with his father, Thomas Long Plume, in a wild west show. During his travels, he taught himself the sign language of other tribes of Indians," according to a 1951 unidentified newspaper article on file in Special Collections at the Glendale Public Library.

The article said that the television star and his wife would appear at a Glendale Historical Society event to tell the story of the "Indian Sign Language in Pictures'' and would demonstrate Indian arts and customs. Plus, the couple would bring along their 3-month-old "papoose" Robin (Robert Timothy). All were to be attired in Indian regalia.

His wife, a Seneca Indian known in tribal circles as Gayewas, was known in archaeological and ethnological fields for her work at the Southwest Museum under the name of Bertha Parker Cody.

Cody's background was revealed in a 1996 New Orleans Times-Picayune article stating that Cody was born to immigrants from Sicily.

A profile of Cody, posted online on "Hollywood Star Walk" by the Los Angeles Times, said that, in 1919, a film crew used the family's Oklahoma farm as a movie location. Within a year, Cody's father had come to Hollywood as a technical adviser.

He brought his family along, and Iron Eyes Cody soon got into show business. After touring with the wild west show, he returned to both act in and direct several "quickie westerns," according to The Times online report.

Cody was already a celebrity when he became a supporter of the local Scouting program and he often taught Indian lore to Order of the Arrow members up at Camp Bill Lane.

Baker said in a recent telephone interview, "When I was on the staff, Iron Eyes would come to the camp. Other times, we would visit him in his home."

Baker has many fond memories of Cody, and said it really didn't matter to him whether Cody was of Indian background or Sicilian.

"He was what he was to us, a friend and a good person," Baker said. "We didn't inquire into each other's background or ethnicity."

Cody, who denied the 1996 Times-Picayune report when it appeared, died three years later and is interred in the Hollywood Forever Cemetery.

"He lived and worked as an Indian for all his adult life; he labored for decades to promote Native American causes, and was honored by Hollywood's Native American community in 1995 as a "non-Native" for his contribution to film," according to an article posted on the IMDb website. 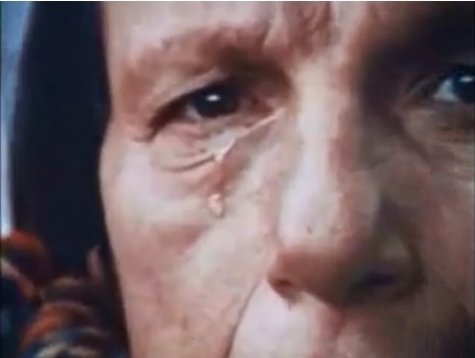