The History of The Hopi Soyaluna Ceremony 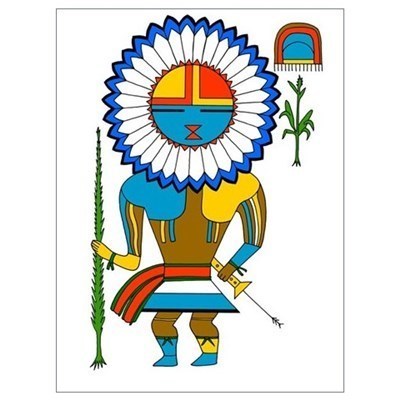 It is a ceremony related to the sun as it relates to the winter solstice.  It is one of the Hopi's most sacred ceremonies and is also called the "Prayer-Offering Ceremony" because it is a time for saying prayers for the New Year and for wishing each other prosperity and health.

The date of this observation is on December 22.  It is celebrated by the Hopi Indians. Although a black Plumed Snake is the basic symbol of this ceremony. But it is not based on snake worship. (Just like their Snake Dance Ceremony isn't either.)  It is a ceremony related to the sun as it relates to the winter solstice.  It is one of the Hopi's most sacred ceremonies and is also called the "Prayer-Offering Ceremony" because it is a time for saying prayers for the New Year and for wishing each other prosperity and health.

In midsummer, the Hopi performed their Snake Dance Ceremony when they felt the sun was close to the earth. (See our page on this Sun Dance) But, basically the Sun Dance was a request for rain from the gods of the underworld. But, when the sun started to go away, the Hopi attention was now focused on the sun leaving them altogether. Yikes!

The Hopi believed that at the winter solstice that took place in December the Sun God had traveled as far from the earth as he ever did. So, in order to bring the Sun God back, this meant that it would require the most powerful humans (aka Hopi warriors) to talk the Sun God to turn around and come back to them.

Therefore, the whole purpose of the Soyaluna ceremony that the Hopi do still to this day, is to prevent the disappearance of the sun at the time of the year when the days are the shortest.

The preparations for the Soyaluna ceremony start by cutting pieces of cotton string and tying feathers and pinyon needles to the end. These are exchanged among friends and relatives during the day.  Sometimes this is done by tying them in the recipient's hair.

When the person who made this feathered string gives it to someone, he says, "May all the Katchinas grant you your wishes tomorrow."  The Katchinas are the spirits of the Hopi ancestors. (See our page on Niman Katchina.) Then the giver holds it vertically and moves the string back and forth horizontally. Later that night, everyone takes a willow branch and attaches all the strings that he or she has received to it.  The sticks are carried to the kiva (ceremonial meeting room) and placed in the rafters making the room look like a bower of feathers and pinyon needs. (More about the Kiva is on this page.)

The main celebration will take place in the kiva wear the chief resident of the Hopi society wears a headdress decorated with images that symbolize rain clouds. He will also carry a shield that has a star, an antelope and other symbolic objects have been drawn. Someone will also carry an effigy of Palulukonuh, also called the "Plumed Snake" what is carved from the woody stalk of the agave plant.

The shield bearers enter the kiva and take turns stamping on the sipapu (a shallow hole covered by a board that symbolizes the entrance to the underworld.) Then they arrange themselves into two groups: One on the north side of the room. One on the south side of the room.  They then start singing as the bearer of the sun shield rushes to one side and then the other.  He is driven back by the shield bearers on both sides. The movements of the shield bearers symbolize the attack of hostile powers on the sun. It's not uncommon for one or more of the participants in this mock struggle to faint from the heat inside the kiva and exhaustion.

One the west wall of the kiva is an altar made up of a stack of corn (two or more ears have been contributed by each family in the pueblo, surrounded by husks and stalks. There's also a large gourd with an opening in it. The head of the effigy of the Plumed Snake sticks out of this gourd. In a puppet-like manner, the snakes head will rise slowly to the center of the opening and make a roaring noise. (All this is done by someone manipulating it in the background behind the altar.) The shield bearers will then throw meal to the Plumed Snake effigy. In response to each offering the snake roars.  When the Sun God's footprints appear in the sand, everyone knows that he's been persuaded to return.

The name "Soyala" means Time of the Winter to those who have been given that name.

The effigy of the plumed snake that is in the kiva is painted black and has a tongue-like appendage protruding from it's mouth. This black snake symbolizes the evil influences that are driving the sun away.  So the assembled chiefs make their offerings of prayer and meal to this black Plumed Snake to try to persuade him not to "swallow" the sun, like he does when there is an eclipse.

The Hopis believe that the days are shorter in the winter and grow longer in the summer because it's driven away by hostile forces and then after a considerable battle it's persuaded to return.  So, without the Soyaluna ceremony the sun might never come back, bringing warmer weather that's needed for growing corn and other food.

So, the bearers of the Sun Shield represent the Hopi Sun God, whose favors are crucial to the tribe's survival.