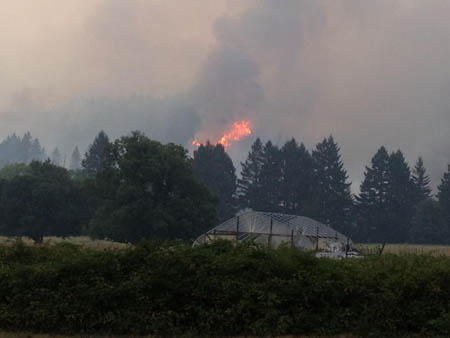 “The cause of the fire is still under investigation, but preliminary signs indicate it was probably a human caused fire because there was no lightning in the area,” said Mike Beasley with the Six Rivers National Forest during a briefing held in Hoopa with the Type 2 Incident Command team (NorCal Inter agency Team II) set to take command of the fire this afternoon from their incident command post provided by the  Hoopa Valley Tribe.

A joint investigation is being conducted by CalFire and the U.S. Forest Service.

During the briefing, officials said one firefighter was injured by a falling branch which broke his nose.

Officials said rumors that the evacuation was lifted are not true. The evacuation of certain areas of Orleans remains in effect as of 4:30pm on Tuesday, July 30.

Power to all of Orleans was restored by 3 pm this afternoon.

Residents of Orleans were forced to evacuate the town after wildfire broke out just after 5 pm on Monday, July 29, along Highway 96 near Camp Creek Road.

Within two-and-a-half hours, more than 100 acres were burned and several homes were destroyed. By 10:30 pm, the fire had engulfed over 200 acres, and hundreds of homes were threatened. By Tuesday morning, the fire grew to more than 350 acres and consumed two residences and five outbuildings.

The fire is moving up Sims Gulch toward the G-O Road in a steep forested area.

Julie Ranieri, Public Affairs Officer for the U.S. Forest Service’s Six Rivers National Forest, said, “Power lines and phone lines are down, and Highway 96 has been closed near Orleans.”

Highway 96 has since reopened to one-way controlled traffic and some area residents in the Karuk Housing area were allowed to return to their homes at about 11am on Tuesday.

Law enforcement officers from the California Highway Patrol, Humboldt County Sheriff’s Office, and the U.S. Forest Service were also assisting in the evacuation and rescue operations.

A public meeting will be held this evening (Tuesday) at 6pm at the Karuk Department of Natural Resources Building in Orleans.

The cause of the fire is under investigation.