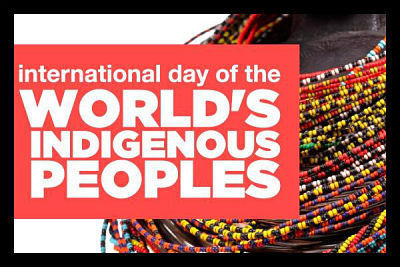 Berkeley replaced Columbus Day with Indigenous Peoples Day in 1992. The inaugural year was filled with ceremonies, and each year since then the city has celebrated with a free pow wow, organized by local Native and non-Indigenous residents. Held in Civic Center Park, the Indigenous Peoples Day Pow Wow and Indian Market has become an important annual event, where the local population can interact with and learn about Native culture and the Bay Area Indian community.

The idea of replacing Columbus Day with Indigenous Peoples Day was first proposed in 1977 by a delegation of Native nations to the United Nations-sponsored International Conference on Discrimination Against Indigenous Populations in the Americas, held in Geneva, which passed that resolution.

In July 1990, representatives from 120 Indian nations from every part of the Americas met in Quito, Ecuador in the First Continental Conference (Encuentro) on 500 Years of Indian Resistance. The conference was also attended by many human rights, peace, social justice, and environmental organizations. This was in preparation for the 500th anniversary of Native resistance to the European invasion of the Americas, 1492-1992. The Encuentro saw itself as fulfilling a prophesy that the Native nations would rise again “when the eagle of the north joined with the condor of the south.” At the suggestion of the Indigenous spiritual elders, the conference unanimously passed a resolution to transform Columbus Day, 1992, "into an occasion to strengthen our process of continental unity and struggle towards our liberation." Upon return, all the conference participants agreed to organize in their communities. While the U.S. and other governments were apparently trying to make it into a celebration of colonialism, Native peoples wanted to use the occasion to reveal the historical truths about the invasion and the consequent genocide and environmental destruction, to organize against its continuation today, and to celebrate Indigenous resistance.

A representative of Berkeley’s mayor attended the Encuentro, to gather information as to how the city should commemorate the Quincentenary. The U. S. Congress had chosen the Bay Area as the national focus for the planned “Quincentenary Jubilee” hoopla, with replicas of Columbus' ships scheduled to sail into the Golden Gate and land in a grand climax (eventually canceled).

In the fall of 1990, a well-attended conference of Northern California Indians met at D-Q University in Davis, California, and organized the Bay Area Indian Alliance for counter-quincentennial planning. They resolved to "reaffirm October 12, 1992 as International Day of Solidarity with Indigenous Peoples." The final day of the conference was moved to Laney College in Oakland and opened to non-Native people. This conference organized Resistance 500, a broad coalition to coordinate 1992 activities with Indigenous leadership. The Resistance 500 coalition broke down into four committees revolving around different municipalities, planning local activities in San Francisco, Oakland, Berkeley and the South Bay.

At the request of the Berkeley committee of Resistance 500, the Berkeley City Council set up a task force to make recommendations regarding Quincentenary planning.  The Berkeley Resistence 500 Task Force investigated the historical record, and concluded that Columbus’s expedition was not a scientific “voyage of discovery,” but a scouting mission for a scheme of imperialism and conquest.

Columbus openly stated that he planned to conquer and colonize the lands he “discovered”: first the Caribbean islands and then mainland America. On his second voyage he brought the Spanish army with him, and proceded to do just that. The islands were populated by over a million Taino Indians, peaceful farmers and fishermen. Unable to find enough gold there to finance his schemes, Columbus captured thousands of Tainos and shipped them to the slave markets of Spain. The Tainos resisted with fishbone-tipped spears, but those were no match for artillery. Columbus demanded that each Taino pay a tribute of gold dust every three months, under penalty of amputation of the hands. In two years over a hundred thousand Tainos were dead, and the survivors were slaves, mostly in mines and plantations. Columbus personally invented European imperialism in the Americas and the transatlantic slave trade. He took personal leadership in acts that would today be called genocide.

Berkeley Resistence 500 reported those historical facts to the city council, and that Native peoples around the world had proposed replacing Columbus Day with Indigenous Peoples Day. The task force recommended that Columbus should no longer be honored, but the city should instead commemorate the contributions of Native people and their resistance to the European invasion. With strong support from the community, the Berkeley City Council voted unanimously that October 12th was henceforth to be Indigenous Peoples Day, to be commemorated annually on the nearest Saturday.

We invite you to come this year to the Berkeley Indigenous Peoples Day pow-wow, make or renew our friendship, enjoy Native American foods and crafts, share a wonderful and powerful experience. Ride the lifestream of the pow-wow highway with us, as Indigenous culture spreads its spiritual roots and breaks through into the mainstream of the multicultural society that is appearing before our eyes today here on Turtle Island.

The Indigenous Peoples Committee works for social justice and human rights for Native Peoples. We promote the necessity of Indigenous wisdom for human survival in balance with the environment. We organize educational and cultural events publicizing Native struggles, including Indigenous Peoples Day Powwow and Indian Market annually on the Saturday nearest October 12th.